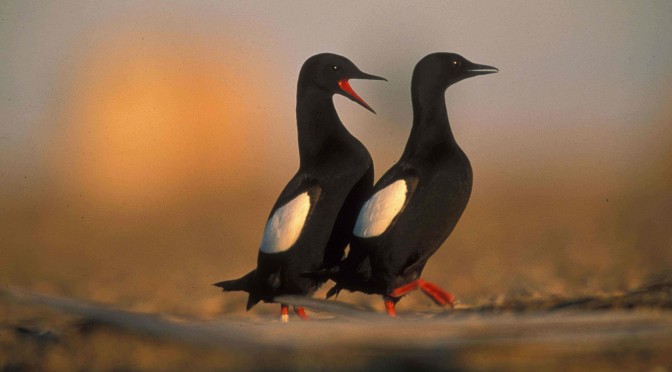 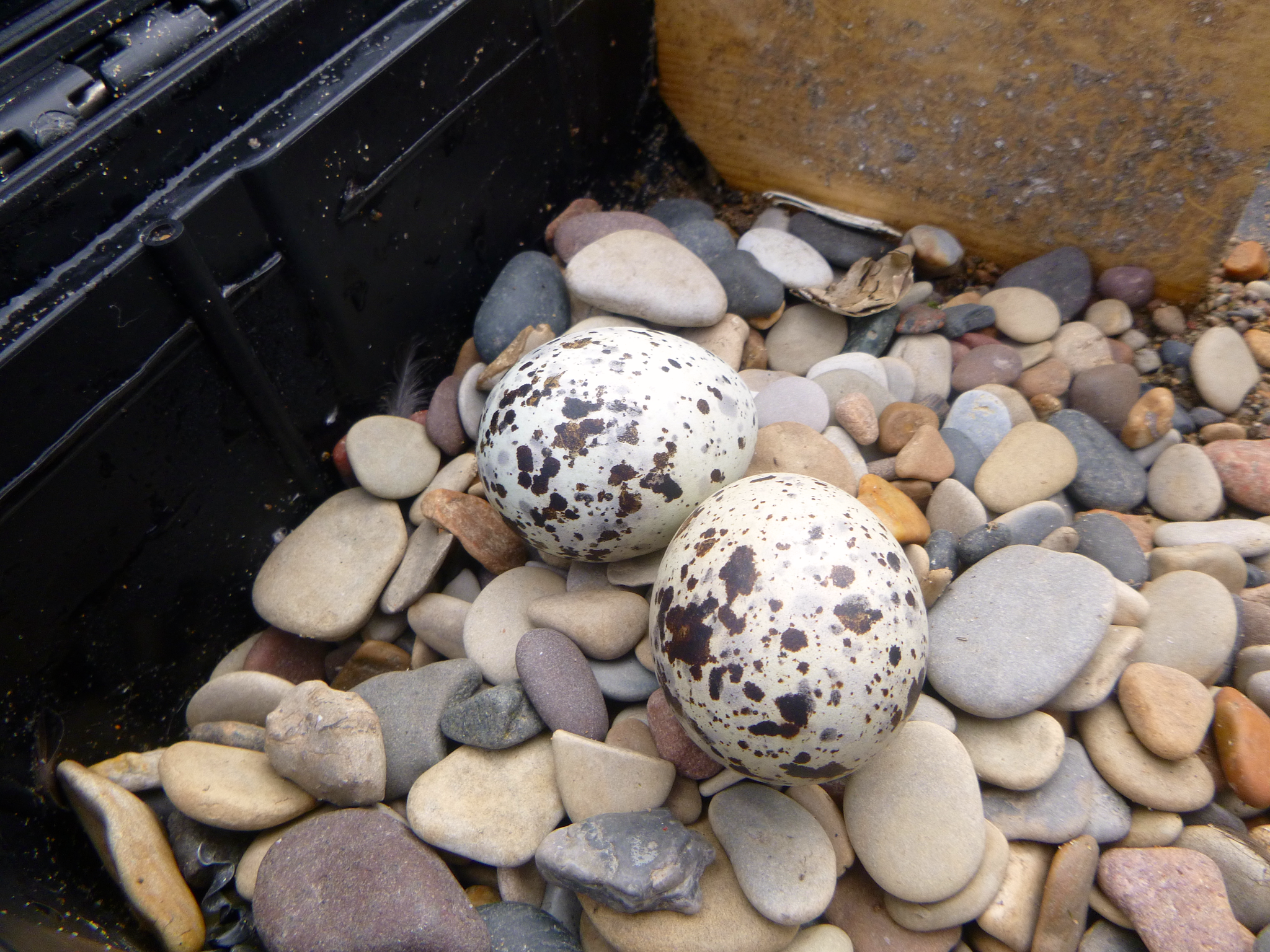 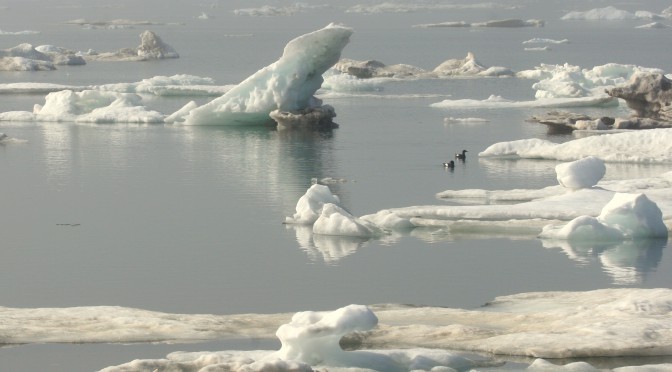 On first sight, what most people notice about Black Guillemots in their summer plumage are their bright red legs.   The species could easily be called “Red-legged Guillemot” – were there not two other species in the guillemot genus Cepphus with red legs.

There are many good reasons to incorporate a field mark (a visible characteristic that can be used to identify a bird or other animal) in the common name of a species.  When first hearing of the Red-tailed Hawk, one can visualize the species in a way not possible when first hearing about the Marsh Hawk.  A field mark in the common name is especially helpful when two species have, as their primary difference, an obvious field mark.  On hearing their names, we instantly know a major difference between the Black-legged Kittiwake and Red-legged Kittiwake, in a way we would not if they were called Common Kittiwake and Beringian Kittiwake.

The colorful characteristics of birds, as a group, play a major role in their ability to capture the attention and appreciation of humans.  Descriptions of the variations in the color of plumage and soft parts allow birders and researchers to not just identify species but also determine gender, age and life-history stage while viewing birds at a distance with binoculars.

I had an interesting experience with ornithological color terminology in early 1969, when I had the opportunity to lead inner-city elementary school children on nature walks. In assessing the bird species we were likely to see and determining the field marks I should point out to the students, I realized that pinkish-beige legs or bills were described in the field guide as being “flesh-colored” – the reference clearly being to Caucasian skin color. It was clear to me that using this terminology would be inappropriate and insulting to a mixed-race group of students, and unproductive in my attempt to instill in them an appreciation of nature.

Many societal changes were occurring in the United States in the 1960s; and recognizing and addressing systemic racism was probably the most important.  My realization that some of the color descriptions used by the major field guide of the time were both offensive and exclusionary, caused me to write its author, Roger Tory Peterson, to express my concerns.  I was glad he took the time to reply, but disappointed in his response indicating he found nothing wrong with the terminology, in part because so few of the bird-watching community were people of color.

The activities and discussion inspired by this spring’s Black Lives Matter movement caused me to think back to my experience half a century ago. I wondered if the use of “flesh” as an avian color descriptor had been addressed or reduced.   It turns out it has not.  A Google search showed the term “flesh” is pervasive in describing pinkish-beige coloring in birds.  I also realized that, as a seabird biologist, I had commonly read about the southern hemisphere seabird, the Flesh-footed Shearwater (Ardenna carneipes), without thinking about the implications of the common name for that bird.

In a post this June to the listserv of the Pacific Seabird Group, an organization I helped found in 1972, I mentioned my 1969 experience, and suggested the time had come for the name of Flesh-footed Shearwater to be changed.   The post and the ensuing discussion had a number of results.  A proposal has been submitted by Alvaro Jaramillo, a biologist with the San Francisco Bird Observatory and educator/guide, to the American Ornithological Society’s North American Classification Committee to have the name of Ardenna carneipes changed, likely to Pale-footed Shearwater.   And eBird is apparently in the process of replacing the term “flesh” in its species descriptions as well.

The discussion of this matter made me curious about the origins and duration of our culture’s misuse of the term “flesh-colored.”  I realized that one of my favorite radio shows to listen to on Cooper Island, A Way with Words, might provide some insight.   I emailed them, the hosts of the show found it interesting that ornithologists were addressing the issue of racist terminology and nomenclature, and they invited me to call in to discuss the issue.  Their research revealed the well-established and overtly inappropriate nature of the term.  For instance, The Century Dictionary, first published in 1889, defined “flesh-colored” as being “the normal color of the skin of a white person; pale carnation or pinkish; the color of the cheek of a healthy white child”.  You can listen to the discussion, which was recorded shortly before I left for the field, at this link.

The misuse the word “flesh” as a color descriptor in ornithology is a good example of the culture signaling that white lives matter more than Black lives and I want to thank those who responded to my concerns about this issue, especially to Alvaro Jaramillo, who took the initiative to write a proposal for a name change for Ardenna carneipes.

This improbable 2020 field season is finishing its second week. As I anticipated, being back in Utqiagvik and heading out to Cooper Island helped make this bizarre year feel a little more normal.  But once on the island, my initial census of the colony quickly reminded me that, while the entire world is focused on the disruptions and dangers of the pandemic, the repercussions of a melting Arctic continue – as they have for the majority of the 47-year Cooper Island study.

In the late 1980s the Mandt’s Black Guillemot colony on Cooper Island had over 200 breeding pairs, thanks to nest sites we provided in the 1970s and 1980s.  The number of breeding pairs began to decline  in the 1990s with gradual decreases in the sea ice on which the species depends. In this century, major declines in sea ice – and in the availability of the guillemots’ ice-associated prey – further reduced numbers and has continued to decrease the colony’s breeding success.

We did not see large scale nonbreeding and egg neglect at the colony until 2018 when, after record low sea ice in the winter of 2017-18, two-thirds of the 75 pairs in the colony did not lay or did not incubate eggs – essentially reducing the colony to 25 breeding pairs.  This colony-wide lack of breeding effort for seabirds is rare, symptomatic of a major reduction in an ecosystem’s ability to sustain a previously supported population, such as occurs at colonies periodically affected by El Nino.

In 2020 the Cooper Island colony has again experienced widespread nonbreeding and egg neglect and a reduction in number of pairs.  The 65 pairs present in the colony this year is the lowest number since the early 1980s.  Of those pairs, only 33 laid eggs, with only 18 pairs incubating.   This essentially reduces the colony to less than 20 functional breeding pairs – similar to the size of the colony when I began the study in 1975.

While this year’s findings are depressing, they are not unexpected. Mandt’s Black Guillemot is one of the few Arctic seabirds dependent on sea ice throughout the year and the reduction of Arctic sea ice has been pronounced and one of the most obvious indicators of global warming.  Arctic sea ice is currently at a record low for this time of year and the increasing atmospheric CO2 levels causing the earth’s warming are higher than they have been in 3 to 5 million years.

The signs that the Arctic is in trouble have been evident for at least three decades. The annual monitoring of the Cooper Island colony has gone from being something enjoyable, as when the colony grew and prospered early on, to now being something that is necessary, to document the continuing decline of a seabird and the marine ecosystem on which that seabird depends.

Given the state of the colony – and the state of the world right now – the discovery of the first guillemot nestlings last week buoyed my spirits more than usual.  Luckily for the current 20+ nestlings, sea ice has remained relatively close to the island this summer, even through a major Arctic cyclone earlier this week, and parent birds are able to find the ice-associated Arctic Cod that is their preferred prey.   The weight gains of the chicks over the past week provide hope that the 2020 season could end with high breeding success for the few pairs that were able to breed this year.  Focusing on the success of individual nestlings helps to maintain one’s spirits during a period when the state of the colony can be disheartening.

In early spring, when the first evidence of the scale of the pandemic was becoming clear, many field biologists realized that restrictions or concerns about travel would prevent them from having a field season. The impact was especially bad for graduate students and early career researchers who had worked hard to obtain funding and prepare for the 2020 field season. It also was a major blow to those of us who have conducted continuous long-term studies requiring annual field work.

Friends of Cooper Island was impacted by the earliest stages of the pandemic when we had to cancel our annual Seattle event scheduled for March 17. We had planned to have Joe McNally, the photographer who was on the island in 2001, discuss his 2019 visit and the video he produced about the major changes that have occurred since his first visit. The video is available at this link.

In late March and early April, like almost all of those doing research in the Arctic, I was prepared to write off the 2020 field season. Given the concerns of traveling through towns or villages with vulnerable populations, I assumed I would not be flying north to Utqiagvik in 2020, as I have done for almost half a century. I was also aware that the loss of my field season was a small and minor consequence of the pandemic and during weeks of “lockdown” tried to concentrate on scientific papers being written with several collaborators using our long-term data sets from Cooper Island.

It thus came as a major surprise when a colleague at the North Slope Borough’s Dept. of Wildlife Management contacted me in April asking what my plans were for coming up this summer. Thanks to the efforts of both the Dept. of Wildlife Mgmt. and the borough’s Dept. of Search and Rescue, I am now in Utqiagvik, having had negative covid test results both in Seattle and here, and heading for my 47th summer on Cooper Island. While the assistance of friends and colleagues in Utqiagvik has always played a major role in maintaining the Cooper Island research, this year that support, and just as importantly encouragement, has made all the difference.

I want to thank the many supporters and followers of the Cooper Island research who have shown their appreciation for my efforts over the years, and the donors who were able and willing to financially support a field season before we knew it would be possible.

While the issue of climate change is currently receiving less attention due to more immediate social and economic disruptions, global temperatures continue to increase with major effects on Arctic sea ice now at a record low (image below). It is now all the more important to maintain one of the few data sets that has demonstrated the biological impact of decreased sea ice.

I hope you have a safe summer and I look forward to providing updates over the next two months from Iglurak (the Inupiat name for Cooper Island).